There was a great debate among horsemen in the mid-19th century, as to whether or not all four of a horse’s legs were lifted off the ground at the same time they were galloping. The action happened so fast that it was impossible to see the truth with the naked eye, and people from all walks of life had strong opinions for and against what they termed “unsupported transit.” Railroad magnate Leland Stanford- former Governor of California and future benefactor of the university that bears his name, took a strong stance that unsupported transit did indeed occur, and put his entrepreneurial verve to try and prove it. 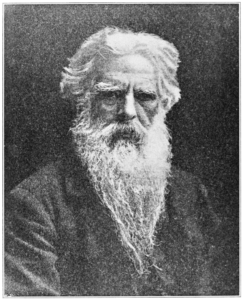 Stanford hired the famous early photographer Edward Muybridge to settle the question using the newly emerging field of photography, hoping to be able to record an image of all four legs of the horse off the ground. If Leland Stanford filled the stereotype of a tycoon, a portly, well-dressed and manicured gentleman propped up with a pearl-covered walking cane, Muybridge was the epitome of a wizard from Middle Earth. A thin, spry man with penetrating blue eyes, long flowing white hair and an equally long white beard, Muybridge looked decades older than the 49 he was at the time. And he was a conjurer in the newly emerging craft of photography, which magically depicted reality through black boxes, vats, and mysterious potions.

Born Edward Muggeridge during 1830 in the southwest suburbs of London, and the son of a coal merchant, Muybridge emigrated from England to San Francisco when he was 25 years old. He had a peculiar penchant for changing the spelling of his name every few years by moving a vowel here and there, and otherwise switching consonants around. After a number of intervening variations, including Helios, he became known as Edward Muggridge, then Edward Muygridge, and finally Eadweard Muybridge. And he had as many careers as he had spellings of his name: book salesman, inventor, capitalist (he started a failed mining company), and finally an artist. In time, he became the most successful photographer in San Francisco through his beautiful images of Yosemite and the American West.

On June 15, 1878, Muybridge invited members of the press to watch Stanford’s horse trot across the set he had prepared and trigger each of the 12 cameras, one after another, provided a dozen perfectly crisp images of the horse in motion– one which showed the equine with all four feet clearly in the air.

The idea that motion in the world could be captured and replayed at any point was as transcendental as photography had been a mere 50 years earlier. Before photography emerged in the early 19th century, visual representations of the world were mediated by artists, who consciously chose what and how to depict them. Photography shortened that interpretive chain by using technology, and Muybridge’s application of photography to capture motion paved the way for these slices of time to be combined so as to reconstruct the motion they discretely captured.

Muybridge then took things a step further. To show two seconds of a horse in motion, he modified a magic lantern projector that was typically used to project still images painted on glass slides. His “Zoopraxiscope” employed a mechanism that rapidly spun a glass disk with 12 of his frozen images of a horse galloping around its circumference in between a light source and a lens.

Muybridge promoted his Zoopraxiscope to thrilled audiences across the country, including one stop Orange, New Jersey, the hometown of Thomas Edison. America’s most prolific inventor reportedly attended the lecture and soon embarked on an ambitious effort to commercialize the idea of moving picture by invented new technology to record and display short sequences.

Edison built the first motion-picture studio in 1893 and brought in performers, including scenes that were off-color for the era: scantily-clad women dancing, boxing matches, cockfights, and even performers from Buffalo Bill’s Wild West Show. And just to prove the historical precedence of Internet cat videos, there was Professor Welton’s Boxing Cats (Google “boxing cats” see the actual movie).

Edison was so enthralled with the potential of educational films that in 1913 he pronounced: “Books will soon be obsolete in our schools. … Our school system will be completely changed in ten years.” [1] Like most proclamations of technology changing schools, these too would not be prophetic, but moving pictures have certainly been a staple in the school diet.

Excerpted From Sage on the Screen: Education, media, and how we learn
by Bill Ferster. Johns Hopkins University Press, 2016