Whiplash: How to Survive Our Faster Future is a new book by the MIT MediaLab’s director Joi Ito and NorthEastern University media professor Jeff Howe about the trends they see for the future around technology.

Many of the stories in the book surround MIT’s fabled MediaLab, a laboratory and teaching environment, which was founded by Nicholas Negroponte in 1985 to explore the future through innovation around the convergence of technology, multimedia, and design. Joi Ito took over the lab in 2011 in what some have called an “unusual choice” for MIT, since he had no college degrees, making his mark by founding a number of Internet and technology companies.

The book is well-written– kind of a cross between Negroponte’s own 1996 book on the future of the digital world, Being Digital and Stewart Brand’s 1987 Media Lab, which profiled many of the innovative projects then active at the MediaLab. Whiplash is organized around a list of nine emerging principles, which Ito keeps on a piece of paper taped to his office wall:

Within this structure, Ito and Howe show these principles emerge through stories about new technological efforts. Most were enlightening and entertaining, but two stood out for me in particular:

In Compasses over maps, there is a great discussion of how the standardization, free-licensing, and collaborative efforts creating of genetic snippets that can be used like “lego blocks” to understand and create new genetic objects in an open-source manner, like computer software. The BioBricks Registry of Standard Biological Parts is scalable peer-to-peer exchange for materials used throughout biomedical research, and they have created an agreement for easily sharing genetically encoded information. 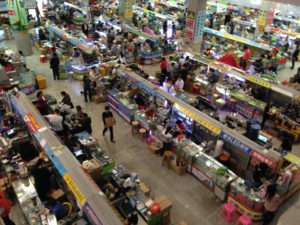 In Risk over safety, Ito and Howe take us to the Huaqiangbei electronic markets of Shenzhen, in southeastern China, where small, rapid manufacturing have been taken to a high art. Thousands of small companies specialize in manufacturing the various components needed to create high-tech objects. Shenzhen hopes to be the next Silicon Valley for the next generation of hardware startups. The home of Foxconn, the manufacturer of the iPhone, Shenzhen is ramping up its design skills and is moving away from manufacturing other people’s ideas, to create new and innovative products.

I hate to be too critical, but having read a bunch of these kinds of books over the years, aside from the great sections on Shenzhen and BioBricks, I can’t say I learned too much from it. That said, it’s well written and if you haven’t been immersed in this kind of futurist, trend-revealing literature ( think Alvin Toffler’s Future Shock ), then this book is a good place to get your fix.

Bill Ferster is a research professor at the University of Virginia and a technology consultant for organizations using web-applications for ed-tech, data visualization, and digital media. He is the author of Sage on the Screen (2016, Johns Hopkins), Teaching Machines (2014, Johns Hopkins), and Interactive Visualization (2012, MIT Press), and has founded a number of high-technology startups in past lives. For more information, see www.stagetools.com/consult.

Image of Huaqiangbei electronic markets in Shenzhen by Tom Whitwell