The traditional media used in education has at least one major Achilles heel before the mid-20th century. No matter how well produced and instructional the content may be, the learning experience is primarily passive and the extent to which learners can control the flow of that content is limited. For the broadcast media of radio and television, the situation is much worse in the case of the as the only opportunity for viewer agency is to turn it on or off. When the content is recorded and made locally accessible, a viewer can replay segments of the instruction as many times as needed, that control significantly increases, but overall, the instructional experience is not as optimal as it could be. This is because the media is inherently linear, designed to be consumed in a straight line from beginning to end.

Until the 1920’s, moving visual media has been largely mechanical in nature. When electricity was used at all, it was to either illuminate projection through arc or incandescent lighting or to drive the mechanism using electric motors. The captured representation of the image was very close to the reality it tried to replicate. One could look at a movie frame with the naked eye and see the small image, and even the squiggly lines on a phonograph record had a direct physical relationship with the sounds it recorded.

As time went on, the correlation between the recording and its original subject became more and more abstract. If you were to look at a MPEG-encoded video file from today’s digital media, you would not be able to have any clue as to its content by looking at the recording without elaborate mathematical decoding. In order to be transmitted like radio, visual imagery would need to be represented by analog electronics, and without using a physical medium like film. The recording of images via television is an intermediate point in the evolution towards digital media, but before there was television, there was Phonovision.

In 1981 a British engineer named Donald F. McLean checked out from his library a BBC audio LP album on the history of early British television efforts. One of the disks, entitled We seem to have lost the picture, had a track on it that sounded like a “swarm of bees” when played.[i] The disk contained encoded imagery from a mid-1920s television system developed by the Scotsman John Logie Baird, who had succeeded in capturing images onto a modified phonograph disk but had no success playing them back. This discovery launched McLean on a decade of experimentation to be able to see the imagery Baird had recorded in 1927, but never saw himself. 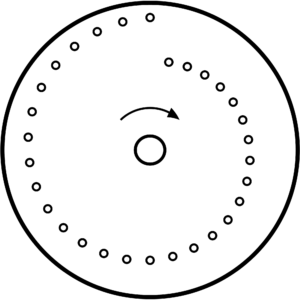 Rather than capture full images as the earlier moviemakers did, Baird divided each image into small strips and recorded each one as a separate line. To achieve this scanning, he spun a large vertical disk that had 30 large lenses embedded within its circumference, called a Nipkow disk. Each successive lens was slightly closer to the center of the disk so that each lens captured 1/30th of the image in a thin vertical stripe, which was turned into electrical signals by a photocell. Baird then used a modified phonograph to record 30 of the stripes as regular tracks on the record. 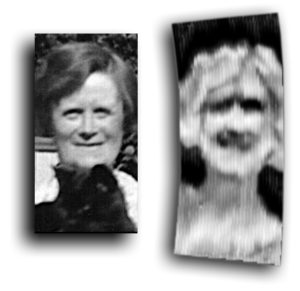 McLean methodically reconstructed Baird’s images from the disks, and he was able to show the low resolution moving pictures, where they had never been seen before. One movie that Baird had recorded in 1927 was of a Mabel Pounsford smiling for the “camera.” Going one step farther, McLean was able to find a photograph of Ms. Pounsford and compare it with the newly revealed imagery from 20 years earlier Baird’s technique of scanning an image into discrete lines, and turning those lines into electrical signals would prove to be the basis of the better looking images television would later offer.

The videodiscs we came to know on the 1980s owe a debt to John Logie Baird’s work a half-century earlier. They remained popular in medical and training applications for a few years, but outside of a few noble efforts, they never caught on in the larger educational community. Like the first educational films, some 75 years earlier, there were not enough videodisc players in schools, and also a paucity of good disks that would encourage schools to purchase them and give up their well-entrenched 16mm films and projectors. Another issue is the change in teaching that integrating interactive media required to effectively use it in the classroom. Non-interactive films and videos are passively viewed as a whole-class activity, often providing a break for the instructor. Interactive media is typically used individually, or in small groups requiring a different set of teaching skills, the instructor may not be as familiar with.

Bill Ferster is a research professor at the University of Virginia and a technology consultant for organizations using web-applications for ed-tech, data visualization, and digital media. He is the author of Sage on the Screen (2016, Johns Hopkins), Teaching Machines (2014, Johns Hopkins), and Interactive Visualization (2012, MIT Press), and has founded a number of high-technology startups in past lives. For more information, see www.stagetools.com/consult.

Excerpted From Sage on the Screen: Education, media, and how we learn by Bill Ferster. Johns Hopkins University Press, 2016